Ben Labaschin · June 15, 2018 · 12 min read
Evidence we have about millennials suggests that their transportation use may have been fueled in large part by the debt they have.

In 1989, the essayist Barry Lopez wrote what would become a highly influential critique of America’s relationship with its own geography. In “The American Geographies,” Lopez argued that Americans had developed a shallow, imprecise view of their country. To Lopez, the subtlety of America’s natural landscape had been thoughtlessly replaced with easily-digestible generalities — it was as if American geography could be divided into the Grand Canyon, some national parks and maybe Walden pond, for those who still read.

“To truly understand geography,” Lopez lamented, “requires not only time, but a kind of local expertise, an intimacy with place few of us ever develop.” According to Lopez, to really know a place — to understand its flavor — requires time and patience few of us ever willingly provide.

He could have just as easily been referring to our relationship with data.

With data, as with nature, we are often just as quick to generate overarching narratives about our world, even if these narratives are not universally applicable.

A wealth of evidence exists to indicate we do this. From BMI to GDP, the metrics we use to describe ourselves and our society are often rough generalities. It’s not that what they tell us is wrong; it’s simply that these measurements don’t share the whole story.

So, if these metrics don’t tell us the whole truth, then why do we still use them? Maybe it’s because, like Yellowstone or the Grand Canyon, an accurate story, generally defined, often effectively (and efficiently) describes enough of what we’d like to know about the world. Namely, whether or not we are obese, or whether or not the economy has contracted this year.

It is with this cautionary note that we can now turn to analyze current trends in one of our most prominent modern generalities: the millennial. (*cue thunder and lightning*)

Yes, the millennial. Like the Loch Ness monster or the moon landing, the millennial has reached almost mythical status. Perhaps it’s because, at a population of 75.4 out of 320 million people as of 2015 (~23.5 percent), millennials officially became America’s largest generation, arguably making them the most significant players in the modern American economy.

It’s also likely why news articles about millennials tend not to be very generous.

Maybe you’ve seen them? The front-page stories calling millennials the “Me, Me, Me Generation”, the headlines lamenting the role millennials have played in ruining [insert beloved American institution here]. If it’s news to you that millennials are ruining America, feel free to type into your search bar “millennials and marriage,” “millennials and diamonds” or my favorite, “millennials and Applebee’s.” You won’t be disappointed.

Now, as you scan the internet, observing all the bizarre things millennials do, you may wonder what nature and GDP have to do with millennials.

Well, just as natural and economic concepts can be arbitrary, “generation” is an ambiguous concept. To put it bluntly, “generations” are made up. Yet, we still use generations to distinguish ourselves and to measure our progress. Perhaps it’s because, at some level, we all share the tacit belief that generalities need not tell us everything about a topic, as long as they tell us enough.

Depending on where you look, millennials are born somewhere between the 1979 and the late 1990s. Still, where the definition may vary, evidence indicates there are a few central patterns to this age group worth commenting on — no, not goat yoga.

But first, a little context.

Younger millennials are spending less. A recent Gallup poll indicates that this portion of youth are the first since the Great Recession to reduce spending by almost $20 a day (see below). The proximity to America’s recessionary period (2007-2009) is no coincidence. Studies indicate that the Great Recession played an important role in shaping millennials’ consumption behavior.

Why the sudden change in spending habits?

Though the answer might vary among specific demographic groups, make no mistake — overall millennials are in debt. And not I-can’t-afford-my-avocado-toast debt, either.

Millennials are historically, uniquely burdened with debt. Of the $3.6 trillion Americans owe in consumer debt, a full 30.5 percent ($1.1 trillion) is owed by millennials. As the most educated generation ever, most of this debt comes from student loans, having outpaced credit card debt for the first time.

And there’s the rub. Over the past decade, millennials have become more insensitive to the increased cost of education. 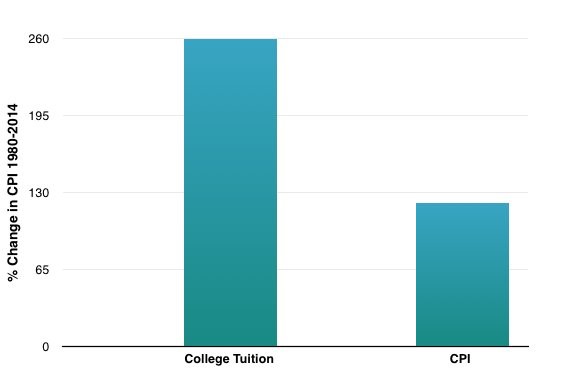 See that bar on the left of the chart? That’s the average growth in price of a four-year college tuition including fees, room and board, using Bureau of Labor Statistics data. From 1980 to 2014, the average cost of tuition rose nearly 260 percent from $9,438 to $23,872.

And the bar to the right? It refers to the consumer price index (CPI): the cost of a standard bundle of goods (eggs, milk, other stuff) over time. CPI is useful because it serves as a useful proxy with which to track inflation: the increase in the price of similar goods and services.

So, this bar says that between 1980 and 2014, CPI increased about 120 percent — way less than the increase in the price of education.

The moral of the story? Well, there’s not a clear answer.

The large rise in college prices cannot be explained solely by inflation. The difference in prices could stem from “value added” — but reports refute these claims. And, yes, per capita financial aid has fallen over the past few decades, but others argue this is because total college attendance has also risen — up approximately 34 percent from 1980 to 2015, according to one estimate.

That’s an increase of almost 8 million students in 35 years! (Cautionary Note: As my mother could have told you after I chose a (brief) career in farming post-high school, college enrollment is not the same college attendance…so take these numbers with a grain of salt.)

The point here is this: Some argue that subsidized college funding is up while others argue the opposite. Even the most robust, 60-page studies don’t provide conclusive results. But no matter the truth of it, the result has been the same; students are paying more for college, and that has affected the economy.

Recent Federal Reserve research suggests that, despite an 81 percent increase in state average (enrollment-weighted) public tuition costs over the last decade, college attendance has not wavered. Even adjusted for enrollment volatility, the higher college costs have not noticeably deterred students from attending public college in any state.

Economists call this insensitive price change “inelastic demand”. For our purposes, the evidence implies that millennials don’t just want education, they feel they need education. As a consequence, many will willingly incur debt to attain it.

Millennials have been feeling the psychological and economic burdens of this debt, too. One UBS survey found that 52 percent of those worried about defaulting on a loan in the next year were respondents between the ages of 21 and 34.

A recent 2017 study by Northwestern Mutual has tracked the effects of this financial stress. According to their data, a majority of millennials experience high-to-moderate anxiety about losing their jobs and about their level of savings compared to just 30 percent of the general population. Meanwhile, almost 70 percent of millennials surveyed expressed worry about future income loss. As a result of this financial anxiety, millennials are 2 times more likely to become physically ill, affecting their job performance.

Whether it be their physical well-being or their spending behavior, debt has clearly had a negative effect on millennials, distorting their outlook and shifting our expectations of them.

In economic parlance, millennial debt has become a problem.

Millennials’ post-recessionary consumption shift triggered great concern around the auto industry. If you had spoken to auto executives in the years immediately following the recession, they would have told you that millennials simply weren’t purchasing cars anymore. *Poof!* Just like that.

Of course, with the benefit of hindsight, we now know that a more accurate representation of millennials is that they were — and are — delaying major life purchases, rather than abandoning them altogether. Still, to auto representatives, these changes are less than ideal.

If millennials are delaying car purchases, how are they getting around in the meantime?

Their data also suggests that millennials tend to view transportation costs and convenience as equally important.

This latter result, that cost and convenience are often held in equal regard, is curious. If millennials are in debt — if their anxiety about the future is extensive enough to encourage them to delay the ownership of major assets such as cars — then why does the data also indicate that millennials are the biggest users of rideshare, when for much of its history the cost of rideshare has been more expensive than taxis? (Note: With the advent of Uber Pool, Lyft Lines, and more, prices may have only recently become routinely cheaper).

Coupled with the research that suggests convenience and cost are often equal among millennials, we can form a general picture about the growth of rideshare the deserves further exploration.

From the evidence we have, we are led to believe that millennials, burdened with student debt, delay car ownership at least until they are older. With the money they save from delaying car ownership, research implies they choose instead to live in environments with an ecology of transportation options, optimizing their travel options, weighing cost and convenience in the process. Consequently, it can be said that millennial debt may well have played an integral role in the growth of rideshare.

Of course, there is no such thing as a millennial. Like the forests, rivers, mountains and springs that comprise our nation, American generations are a helpful model of reality — at once guiding a better understanding of ourselves and the world, but failing to define them outright.

The evidence we do have about millennials suggests, but does not confirm, that their transportation use may have been fueled in large part by the debt they have incurred in recent years. More questions than answers emerge from this realization.

To answer these questions, one thing is clear. As advances in transportation continue to expand mobility options, it will be important to study the socioeconomic implications of these shifts, using helpful generalities to guide our questioning and data to generate valuable answers. 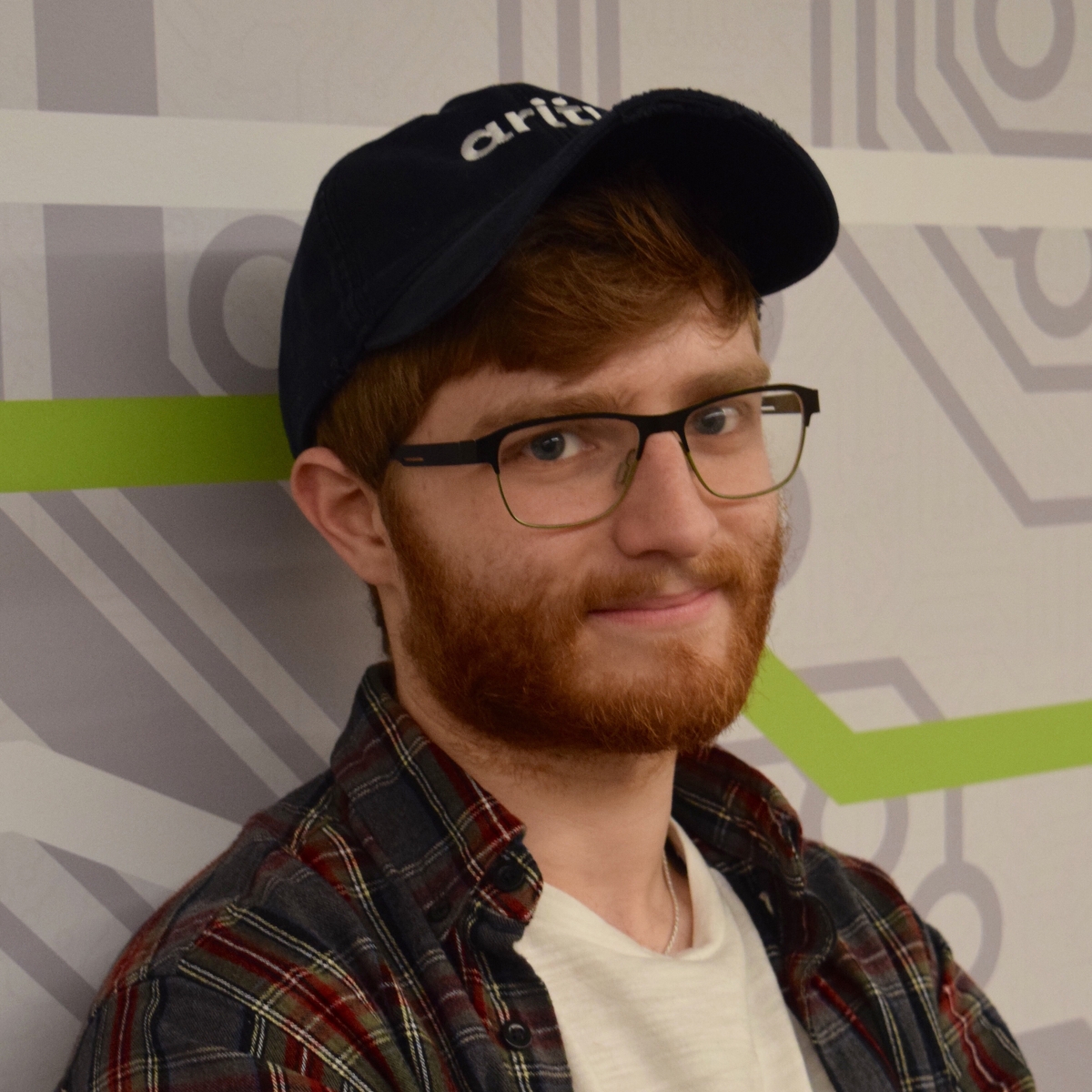 Rideshare as we know it has been around since 1910 and there is a significant, thematic correspondence between what it was then, and what is it today.
7 min read
Company culture

Rideshare services are starting to offer subscription services and one of our team members took the plunge. Read about her experience.
5 min read
Data